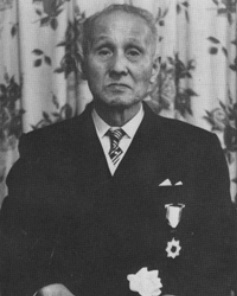 The founder of Wadō-ryū, Hironori Ōtsuka, was born on 1 June 1892 in Shimodate, Ibaraki Prefecture, Japan. In 1898, Ōtsuka began practicing koryū jujutsu under Chojiro Ebashi. From 1905–1921, he studied Shindō Yōshin-ryū jujutsu under Tatsusaburo Nakayama. In 1922, he met Gichin Funakoshi and began to train under him. In 1924, Ōtsuka became one of the first students promoted to black belt in karate by Funakoshi. To broaden his knowledge of Karate, Ōtsuka also studied with other prominent masters such as Kenwa Mabuni of Shitō-ryū and Motobu Chōki. In 1929, Ōtsuka organized the first school karate club at Tokyo University.

In 1938, Ōtsuka registered his style of karate with the Dai Nippon Butoku Kai under the name of "Shinshu Wadoryu Karate-Jujutsu." Soon after, however, this was shortened to "Wadō-ryū" (和道流). In 1938, the Dai Nippon Butoku Kai awarded Ōtsuka the rank of Renshi-Go, followed in 1942 by the rank of Kyoshi-Go. In 1944, Ōtsuka was appointed Japan's Chief Karate Instructor.

In 1952, the Wadō-ryū headquarters (Honbu) was established at the Meiji University dojo in Tokyo. In 1954, its name was changed to Zen Nippon Karate Renmei (All Japan Karate Federation). In 1955, Ōtsuka published "Karatejutsu no Kenkyu," a book expounding his style of karate. In 1963, he dispatched Suzuki, along with Toru Arakawa and Hajimu Takashima, to spread Wadō-ryū around the world.

In 1964, the Japan Karate-dō Federation (JKF) was established as a general organization for all karate styles.

In 1966, Ōtsuka was awarded Kun Goto Soukuo Kyokujujutsu (Comparable to a Kighthood) by Emperor Hirohito for his dedication to the introduction and teaching of karate. On 5 June 1967, the Wadō-ryū organization changed its name to "WADOKAI".

In 1972, the President of Kokusai Budō Renmei, a member of the Japanese royal family, awarded Ōtsuka the title of MEIJIN.

Chief Instructor, Gary E Swift 7th Dan Kyoshi. Gary Swift was born in Leigham Terrace, Plymouth, Devon, in 1956. He started his martial-arts training at the early age of 10 at his junior school at Laira Green. His first taste of martial-arts was learning the popular systems, at that time, of Ju-jutsu and Judo.

After a move to Prince Rock Senior School he was also introduced to the skills of Thai-boxing (Known then as Kickboxing) by one of his gym teachers. Upon his arrival to the South of England in 1972, from Liskeard, he started Wado-ryu Karate in Guildford and Bisley (Surrey), under his most influential Instructor Mick Rapley (6th Dan), in 1974 affiliated to the United Kingdom Karate Federation (Later to be known as the United Kingdom Karate-do Wadokai). Sensei Mick Rapley was one of the first Wado-ka to ever obtain his Black-belt grade in this country. Regular instructors at this time also included Suzuki Tatsuo Hanshi, Maeda Tadayuki Sensei, Shiomitsu Hanshi and Kobayashi Katsumi Sensei.

From this day onwards he studied numerous other forms of Karate, as well as Shorinji-kempo, Muay-Thai, Malaysian Taekwondo (Thoi-kuen-do), Korean HoSin-sul Hapkido, various weapons systems, and a variety of other Japanese, Korean, and Chinese martial- arts.

Today he is holder of numerous titles and ranks in martial-arts including 7th Dan in Wado-ryu Karate, 2nd Dan in Korean HoSinsul Hapkido, and 1st Dan in Malaysian Taekwondo. He has over 34 years teaching experience and over 44 years (Including International) training experience.

During the closing ceremony of the 2007 Wado EXL Gary was awarded the 'prestigious' commemorative award for the 'Promotion and Preservation of Wadokai and Wado-ryu Karate', an honour he will always be proud of.